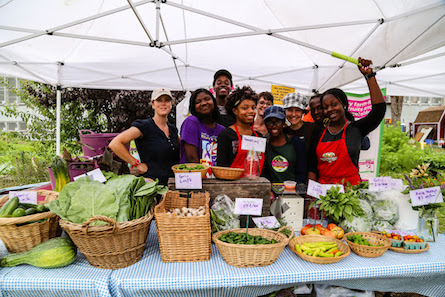 Ten NYC Eco-Schools are in the midst of an exciting collaboration with ioby, a crowd-resourcing platform for citizen-led neighborhood projects. Each school has chosen a worthy greening project in need of funding, ranging from a recycling program to a rooftop aquaponic greenhouse lab, and with ioby’s help, the funds are flowing in.
“When we surveyed our schools, both in 2012 and 2013, over 50% of teachers said that they lacked resources to implement green projects,” said Emily Fano, NYC Outreach Manager for Eco-Schools USA. “We’re thrilled about our partnership with ioby because they’re providing teachers and parent volunteers with the knowledge and skills they need to become effective fundraisers.”
Since mid-October, ioby has been providing representatives from each school with training on how to create their own crowd-funding campaigns; this has included a series of group coaching sessions by phone, tools and templates to work with, and individualized “office hours.”
“We were thrilled to work in partnership with NWF, serving these Eco-Schools with plans to make sustainability a bigger part of their schools,” says ioby co-founder and COO Brandon Whitney. “We often see that great leaders lack timely, right-sized funding to bring their ideas to life. ioby uses a digital platform and behind-the-scenes training to ensure that leaders get the resources they need, all while building a base of supporters along the way,” says Whitney.
ioby also boosted this partnership with a dollar-for-dollar match funded by the Johnson Ohana Charitable Foundation. All of this generosity has helped schools like PS84, an underserved public elementary school on Manhattan’s Upper West Side, raise money for green projects. PS84 has raised all but $57 of the $6,215 needed for one semester of learning in their Urban Roots Science Garden. This is particularly important for them, as the school has no budget for a full-time science teacher.

Another success story is The Youth Farm, in East Flatbush/Crown Heights, Brooklyn. The farm already serves as an outdoor classroom for the High School for Public Service, and now the farm managers want to provide this opportunity to the other four schools housed in the same building. They’ve raised 100% of the $14,985 they need to expand their reach and engage more students, particularly those who struggle most with traditional classroom education.
PS32, in the Gowanus section of Brooklyn, is hoping to jumpstart their recycling program with the money they raise. So far they’ve raised $2,969 of the $3,933 they need to buy recycling bins for all of their classrooms and common spaces, set up recycling stations and signs, and educate their students and staff about recycling.
The amount each school needs varies widely. Some are looking for as much as $46,000 to build rooftop greenhouses or aquaponic labs and others as little as a few thousand to start recycling initiatives or small gardens. But whether they’ve received $100, $1000, $10,000 or more, each school will keep the money they’ve raised, even if they don’t meet their goal; and they’ve learned some valuable fundraising skills along the way. That’s good news for everyone in the ioby/Eco-Schools program, which ends on December 20th, 2013.