Honolulu Theatre’s ‘Grinds’: A Teaching Show You Can Eat

By: AMERICAN THEATRE
October 28, 2014
Honolulu Theatre’s ‘Grinds': A Teaching Show You Can Eat
BY DIEP TRAN 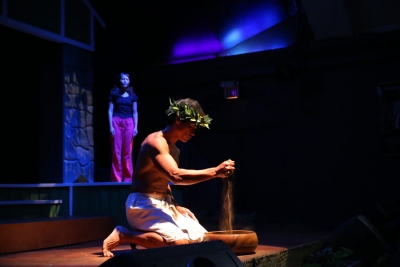 HONOLULU: What tastes better, an organic banana or one imported from Ecuador? “Oh my God, a local banana!” answers Eric Johnson, artistic director of Honolulu Theatre for Youth, without pause. In particular, he has in mind the candy-apple banana,  a natural variety of the fruit which, he assures us, tastes as delicious as it sounds. These bananas, grown predominantly in Hawaii, might be seen as a microcosm of the state’s diverse food cultures.
“There’s no ethnic majority here,” Johnson explains, “so you get these really strange combinations and these wild potlucks that mix, sushi and Thanksgiving turkey.”
Johnson’s resident ensemble recently mined this rich subject by devising Grinds, The Story of Food in Hawaii, an interactive production incorporating live cooking, songs, audience participation and storytelling to teach young Hawaiians about where their food comes from. “We took the idea of being closer to the source culturally, nutritionally and agriculturally, and we asked a bunch of questions,” says Johnson.
The issue of food and sustainability is potent in a state comprised of islands where, if import ships were to stop running, there would only be seven days worth of food for 1.3 million residents. Among its plentiful exports, Hawaii doesn’t just grow bananas: 100 percent of U.S.-produced ginger root, macadamia nuts, taro, coffee and guavas are grown there too.
So Grinds became a way to have a conversation with young people about food issues that went beyond “eat your vegetables.”
“If we can get them to think of these issues in a substantive manner as young people—where our food comes from and what’s the cultural significance of food in an extremely diverse community—we’re able to prime a conversation that will happen to them for the rest of their lives,” says Johnson.
The 60-year-old HTY primarily performs for schoolchildren, with 70,000 students coming to see its shows annually. Grinds originally ran April 5–May 10, 2014, playing to nearly 20,000 students on Honolulu. As is customary for HTY, the show will tour to the other Hawaiian islands Oct. 24, Oct. 28, and Nov. 8. Ten thousand to 15,000 students are expected to see Grinds on its tour.
“That is where the majority of the agriculture actually happens here in Hawaii—it’s a delight to be able to take it out to the surrounding islands,” says Johnson. Teachers are also given a study guide and supplementary material in case they’re interested in teaching about food in their classroom.
Grinds was a collaboration between HTY and a number of organizations: the National Endowment for the Arts, the Hawaii State Department of Agriculture, the Hawaii State Department of Health, Hawaii Medical Service Association, the Kokua Hawaii Foundation and the Johnson Ohana Charitable Foundation. The partners funded the show, providing $70,000 (half of its artistic budget). And unlike in many partnerships among theatres and outside organizations, the funders also collaborated on the content of Grinds.
Take the banana: The Kokua Hawaii Foundation (founded by folk musician Jack Johnson and his wife Kim) wrote a short story about the banana’s journey to Hawaii; based on that, the HTY ensemble created an interactive segment for Grinds.
“We brought two kids up from the audience; one began as an Ecuadorian banana on his journey, and one was a local banana hanging out,” recalls Johnson. “You have to think that if you’re 6, there are probably big battles with your parents about what you’re going to eat and what you’re not going to eat. We’re kind of replacing tension with attention.”
"Grinds: The Story of Food in Hawaii" at Honolulu Theatre for Youth.
“Grinds: The Story of Food in Hawaii” at Honolulu Theatre for Youth.
And that’s just the dessert. The entire show is framed around the creation of a meal, cooked live onstage, with lessons on where various ingredients of the meal come from and a short history of food in Hawaii. The Department of Health wanted to incorporate vegetables into the programming, so each student was given a pack of seeds well in advance of attending the show so they could grow a plant and bring it to the theatre to be cooked in the meal.
“We ended up with a piece that we would never have done on our own,” says Johnson. “In some ways, it’s a much more holistic piece.”
The positive reception of Grinds has inspired Johnson to continue this model, of bringing in outside partners not only for financing, supplementary materials and talkbacks, but also to help in the work’s devising. The next project of this type will be on the subject of water, another obvious topic for an island theatre.
Johnson has already collected a number of Hawaiia-centric facts on the subject. One unsettling tidbit: “The [Great Pacific] garbage patch is our neighbor—almost all of the world’s plastic ends up in the ocean here beside us,” he says. The yet-untitled water work will play in 2016.
Grinds and the water play marks a new emphasis at HTY on original, ensemble-created, locally focused work; about half of the shows in the recent seasons were created in-house by their ensemble of five actors and three designers (most of the rest of their work is original, too, if not ensemble-devised). Johnson attributes the recent success of HTY’s programming to this factor; the theatre has operated in the black for the past five years and has no debt.
“By investing in our ensemble and including partners, we have made not only a financial success but also a very meaningful work for our community.”
ORIGINAL ARTICLE HERE.
Read More

Stepping Away from our Disposable Culture

With a global increase in awareness over the past few decades about the health of our fragile planet, people have become more concerned about the harm posed by plastic products on our environment. As a result, consumers, governments, nonprofits, and even businesses have begun taking action against the use of disposable and single-use plastic products. Reducing the use of plastic bags has been an effective strategy, and placing a tax on their use, or banning them altogether, has become commonplace around the globe.
Read more here at LoaTree.
Read More 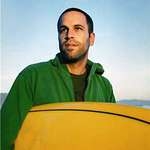 To celebrate Earth Day 2014, Jack Johnson's Johnson Ohana Charitable Foundation will match up to $25,000 in donations to “green” classroom projects on DonorsChoose.org, an online charity that makes it easy to support public school students in need.

Projects qualifying for this offer focus on reducing waste and single-use plastics in schools and communities across the country.

You can read the rest here.

By: MidWeek
February 28, 2014
By PAIGE TAKEYA
For some people, a lifestyle change can start with swapping a plastic bag for a reusable one. Kim Johnson and the Kahuku-based Kokua Hawaii Foundation truly believe it.
“Some people, they start with the bag, then they start carrying around the reusable water bottle and it just becomes habit,” Johnson said. “Then you start seeing, ‘Oh wow, I don’t need to take a straw because that’s disposable; I only use it once,’ or you start thinking about where plastics come in in other areas of your life.” 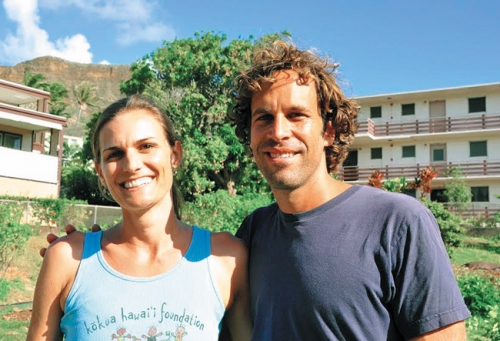 Johnson and musician husband Jack founded KHF 10 years ago to establish environmental education programs in schools and the community. What started with a recycling program has expanded to include multiple projects involving thousands of students around the state.
And those outreach efforts have earned the attention of the U.S. EPA’s Pacific Southwest Region, which named the organization one of its eight 2013 Environmental Champions. “The exciting thing for us is to know that environmental education is making its way to be seen on the national level, which is so important for the movement, especially for the farm-to-school and school garden movement that we’re really involved in here in Hawaii,” Johnson said.
Current KHF projects include ‘AINA In Schools, a farm-to-school focus on everything from nutrition to salad bars; 3R’s School Recycling, promoting waste reduction in 50 schools; and KHF Field Trip Grants and Mini-Grants, which support small, teacher-driven projects.
“It’s really amazing to see in the last 10 years, the consciousness has changed. More and more teachers … are taking on these environmental issues, and a more sustainable lifestyle is becoming more mainstream,” Johnson said.
KHF’s newest effort is Plastic Free Hawaii, helping to reduce Hawaii’s single-use plastic consumption by distributing reusable bags and getting the message out at farmers markets and other sites. Johnson said they are pushing the campaign hard in light of the upcoming July 1, 2015, ban on plastic bags on Oahu.
“I think (what we do) really shows people the ‘why’ behind trying to curb our dependence on single-use plastics,” Johnson said.
Also new is the Hawaii School Bottle Cap Collection Challenge. KHF can recycle the caps that are normally thrown away during plastic bottle recycling. The contest runs until March 31 and is open to all Hawaii schools. Interested groups should visit kokuahawaiifoundation.org/bottlecapchallenge for more information.
KHF always welcomes contributions, and ‘AINA In Schools in particular relies on volunteers to both teach lessons and help prep campus gardens for students.
Upcoming recycling drives are set for March 8 at Kaelepulu Elementary and March 22 at Mililani Waena Elementary. The next beach cleanup also is March 22.
For details, visit kokuahawaiifoundation.org or email info@kokuahawaiii.org.
Original article can be found here.
Read More